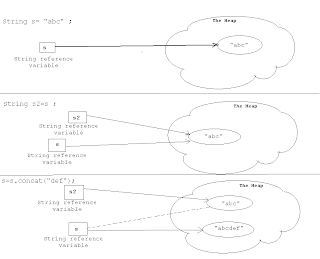 In java String are objects.Just like other objects, we can create an instance of a String with the new Keyword ,as follows

s="abcdef";
As you might expect, the String class has about a zillion constructors,so you can use a more efficient shortcut :

And just because you'll use strings all the time,you can even say this:

Strings are immutable , means Once you have assigned a String value that value can never change. The good news
is that while the String object is immutable, its reference variable is not,
lets discussion start....

The figure will give detailed explaination:
Posted by spice No comments: